Have you ever lived in a really old house? If the walls could talk, what stories would they tell?
When I was in first grade, we lived in an old house with a coal-burning furnace in the basement. The second floor, with its own kitchen, could have served as an apartment. Since we didn’t need the upstairs, it became a huge play area for my sister and me.
The house’s history likely consisted of families growing up and moving away. Nothing dramatic in a stable country like the United States.
Imagine if it had been in Germany.
The House by the Lake: One House, Five Families, and a Hundred Years of German History tells quite a different story. 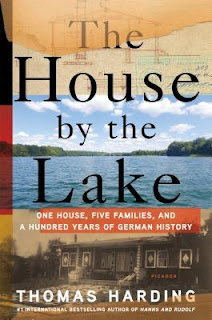 Groß Glienicke Lake, two and a half kilometers long and five hundred meters wide, lay fifteen kilometers west of Berlin. An ambitious, newly wealthy young man purchased an estate measuring two and a half kilometers by four kilometers. He reorganized the old manor farm into a profitable modern farm. For his workers, he created a nursery, then a school. In 1913, he petitioned Kaiser Wilhelm II to be granted a knighthood. This was granted.
World War One erupted. The estate suffered from a labor shortage. The war was lost, the Kaiser fled, and the country became embroiled in rebellions, strikes, and fighting. To ease his financial situation, the landowner leased out portions of his land. Being only a short drive from Berlin, wealthy Berliners would enjoy a second home in such a beautiful setting.
A Jewish doctor and his family leased one portion in 1927. He had served in the war and been awarded the Iron Cross First Class. They built a wooden cottage that, being a summer home, was not heated or insulated. The house contained a large living room, a master bedroom, a small bedroom for the twin sons, who were expected to spend most of their time outdoors, a larger room for the two daughters, a kitchen, bathroom, maid’s room, and guest room. Two additional rooms could only be reached by an outside entrance: the chauffeur’s room and a small water closet reached by another outside door.
The family loved spending weekends or whole summers at the lake. As the 1930s progressed, however, the mood in Germany began changing. The Nazis came to power and began enacting laws taking away the rights of Jews. Friends urged the family to leave Germany, but the doctor believed the German people would come to their senses and oust the Nazis. In 1936, the doctor’s name appeared high on a list of prominent Berlin Jews to be arrested. Warned in time, the whole family including grandparents, fled Germany in ones and twos and reassembled in England.
Eight months later, Jewish property was seized and sold to Aryans. An ambitious, opportunistic composer with his own music publishing company sought to buy up cheap Jewish businesses. With a young family, he wanted a place to relax in the country. The furnished lake house was offered at a good price. The tenants had fled and wouldn’t try to reclaim it any time soon. The wife was delighted with all the inventory. What they didn’t care for, they put out in the rubbish.
While the land was leased, the house had belonged to the Jewish family. The composer tried to purchase it for a pittance. His offer was rejected. Later, he met with a bureaucrat who confirmed the property had been seized, and offered it at less than a quarter of its true value. The composer happily bought it. He also promoted his career by appealing to Propaganda Minister Josef Goebbles for support for his latest operetta.
Berlin became a dangerous place to live as the Allies repeated came to bomb. The composer and his family stayed at the cottage year round, even though it was not winterized. They heard the planes fly over head, and soon the sky turned orange and red as the bombs fell on Berlin.
In September of 1944, the government called up all able-bodied men to defend the fatherland. The composer had previously been excused from a call-up because he was working on the Nazi-approved operetta. Not this time. He and his family fled to an artist refugee colony in the Austrian Alps to avoid serving his country. He left his creative and financial director as caretaker of the house by the lake.
Tune in next week for the rest of the story.
Posted by Terri at 12:00 AM

Email ThisBlogThis!Share to TwitterShare to FacebookShare to Pinterest
Labels: The House by the Lake