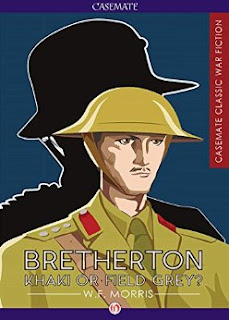 Bretherton is written in three parts, but they are not presented chronologically. Part One is the end of the story, but the writer of the preface, a fictional character, decided to present them in the order he received his information. Confusing. I would have preferred to have not known the end until I got there.
Having read the end of the story in Part One, Part Two dragged a bit for me. It is full of lyrical descriptions of the war experience, but how did that fit with Part One? It is taken from Captain Baron’s diary. He knew Bretherton, but didn’t focus on him. There was always the question, where’s this going?
Part Three is the longest and is about Bretherton, and despite knowing how the story would end, it is so full of twists and turns that I was left wondering how the end would be reached.
Bretherton is a British officer who, through the events of the war, occasionally forgets that he is. The ability to succeed when he is not himself is uncanny. And entertaining.
The author, W. F. Morris, served in World War I. He knew his subject well. This is a British story which contains some terms unknown to me, but they did not prove to be obstacles in following the tale.
Be prepared to start out off balance, but enjoy the ride.
Posted by Terri at 12:00 AM

Email ThisBlogThis!Share to TwitterShare to FacebookShare to Pinterest
Labels: Bretherton