Book Three of my Promise For Tomorrow series was supposed to release on September 6. Last Thursday, I turned in my edited manuscript. I saw the final book cover on July 17.
Earlier this month, I attended a Wings of Freedom tour’s local stop. I brought along my two books and the new cover for a photo opportunity with a B-17. 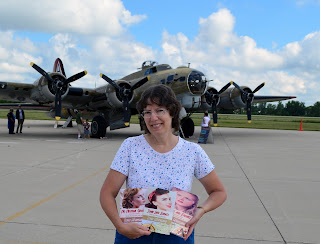 Last Friday, I learned Soar Like Eagles will not release, and the first two books are no longer available. The publisher closed down.
Just like that, it’s over.
I’ve been receiving a lot of suggestions to self-publish my books, or publish with other small publishers. I’ve decided to wait.
Proverbs 15:22 tells us, “Plans fail for lack of counsel, but with many advisers they succeed.” I will talk with “advisers” in two weeks at the American Christian Fiction Writers conference. Not only do I have my woebegone series, I also have a standalone and another planned series I am just getting started with.
While one door has been slammed shut, I trust another will open. And that my shattered dream will grow even brighter. I covet your prayers as I seek to discern God’s leading.