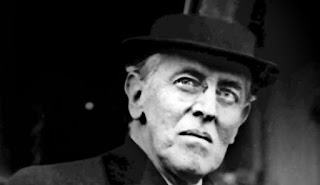 Woodrow Wilson is lauded as a man of peace, but he was a self-righteous disgrace. He believed he was always right about anything. If anyone disagreed with him, that person was not only wrong, but morally wrong and forever scorned. Wilson refused to consult with his cabinet, Congress, anyone but his pal Edward House, who knew how to manipulate him with effusive praise. He was so intent on creating his League of Nations he allowed France and Britain to write a horrendous peace treaty.
The British manipulated Wilson (and America) from the beginning: severing underwater cables so only their propaganda got through. When Britain declared food and nonmilitary material to be contraband, and seized neutral ships, State Department counselor Robert Lansing wrote a rebuke to Britain for intruding on American rights. Wilson showed it to House, who shared it with the British ambassador, who expressed horror. He collaborating with House to write America’s responses to British atrocities, setting a precedence for the future. The United States surrendered its freedom to do business with whomever it chose.
Wilson claimed sending Lansing’s draft would have risked war with Britain. Britain would not have pushed the issue and risked a breach in Anglo-American relations. U.S. naval and economic power could have forced Britain to observe the law of the sea. Disallowing shipment of good to England would have worked. But Wilson was a fool.
He did insist Americans had the right to safely travel on belligerent ships. To require citizens to travel only on neutral ships would be dishonorable, craven, an abandonment of American rights, out of the question. No such law existed anywhere but in his mind.
Britain had been in decline since 1870, while a newly united Germany grew industrially. Britain’s resentment of Germany was a significant reason for going to war. Wreck the upstart rival and reassert their global supremacy.
Germany had been the last European nation to mobilize. The others had mobilized on the basis of false reports. When Russia and France mobilized, Germany was motivated, not by the desire of conquest, but fear of being crushed by its neighbors.
When a U-boat stopped a British freighter with a cargo of munitions and mules, the crew was ordered into lifeboats. A merchantman flying the U.S. flag approached, signaling its intent to rescue the crew. It was really a British naval ship, and sank the sub. Twelve Germans swam to the abandoned freighter. The British marines boarded and executed them. Churchill claimed they were not prisoners of war but criminals. The men in the lifeboats were ordered to tell a concocted story. A few Americans among them refused, and the story got out. Wilson termed it a horrible incident, but was unaffected.
And so it went. Germany bent over backwards to pacify the U.S., restricting submarine warfare despite Britain’s illegal blockade. Wilson informed Berlin that British actions had no relevance on U.S.-German questions.
At the peace conference, Wilson made endless concessions to guarantee his League of Nations. Britain and France realized that, and took advantage of him. France’s Georges Clemenceau hated Germany and wanted to enslave it forever. Even Britain’s Lloyd George saw the awfulness of the treaty and wanted to scale it back. Before intervention, Wilson had said the German people were among the victims of the Berlin regime. Now, when he might have teamed with Lloyd George and tempered France’s insane demands, he refused.
He believed he alone could make a perfect peace. When the pope had tried to negotiate a peace during the war, Wilson wasn't pleased, and doomed the pope's effort. He was destined to be savior of the world.
The U.S. should have maintained strict neutrality, not supplying the Allies and giving them credit. Neutrals Sweden and Holland appealed to the U.S. to pressure London to change, but Wilson refused. The U.S. should not have intervened in the war. The warring nations would have soon exhausted themselves. Effects of World War I remain in play today, from the Espionage Act of 1917 to trouble in the Middle East.
Why is this important to me personally, one hundred years later? I defended Wilson in my debut novel, Friends & Enemies. Paul, the main character, says:
“Wilson wanted to keep us out of the Great War. The poor guy didn’t dictate the terms of surrender. France and England did. They were determined to have their retribution for all the damage done to them.”
Wilson may not have dictated the terms, but he refused to change them.
Recommended Reading: A World Remade, by G. J. Meyer, coming in March, 2017.