If you’ve ever watched a World War II German submarine movie, you know the U-boats had two toilets for crews of about fifty men. And at the start of a voyage, one may have been unusable because it was filled with provisions. 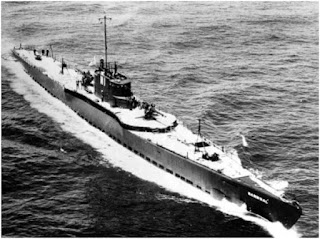 The German toilets didn’t have holding tanks. Rather, they discharged directly into the sea. This could only be done when the sub was at or near the surface. Otherwise, the pressure on the hull would be too great for flushing. As you may imagine, collecting waste until it could be flushed out added to the stench of diesel fumes and body odor.
U-boat 1206 was a late model sub that began its first patrol on April 6, 1945, one month before the end of the war in Europe. It sailed from Kristiansand, Norway, to seek and destroy Allied ships in the North Atlantic.
U-1206 featured new, improved plumbing. Its high pressure toilets could be operated at greater depths. They were extremely complicated, however, complete with instruction manuals, and designated crewmembers were trained in their operation.
Eight days into the patrol, the sub commander (supposedly) tried to use the toilet without the help of a toilet specialist. He did something wrong, and then summoned a specialist. The trained man misunderstood the situation and opened the outer valve while the inner valve was open. Sea water flooded in.
Directly underneath the toilet were the batteries. The seawater combined with battery acid, producing chlorine gas that spread throughout the U-boat. The commander had no choice but to surface and blow the gas.
The commander's official report is a little different:

In April 1945 U-1206 was in the North Sea targeting British Convoys. The diesel engines had broken down. We were therefore unable to charge batteries by snorkelling and they were depleted.  In order to repair the diesel we dived to 70 metres about 8 to 10 miles off the British coast, un-molested by British forces. Diesel repairs were taking place, I was in the engine-room when a water leak occurred in the bows.  As I later learned, a mechanic had tried to repair the forward toilet and water had leaked through the outboard valve. I would say - although I do not have any proof -  that presumably the outboard vent gauge either gave false readings or was incorrectly installed. The Chief Engineer, who at the time of flooding was in the control room, then used all the compressed-air to surface the boat despite the strong influx of water.  However the batteries were now full of seawater and chlorine gas fillled the boat. We were by then completely incapable of moving or diving. As by this time we could be discovered by British aircraft and guards, I let the boat sink. The crew then succeded in reaching the Scottish coast in rubber boats. Tragically, in an attempt to climb the dangerous steep cliffs, three crew members were drowned. Several men were taken onboard a British sloop. 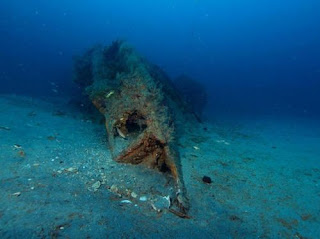 In any case, U-1206 was eight to ten miles off the coast of Peterhead, Scotland. The sub was quickly spotted and came under attack. Extensive damage prevented the sub from diving, and the commander ordered Abandon Ship and scuttled the submarine. One crewman was killed in the attack and three others drowned; the other 46 were captured. In the eight days of its patrol, U-1206 caused no harm to Allied ships. Instead, it has the notoriety of being sunk because of its toilet.
Posted by Terri at 12:00 AM