The Spider and the Sparrow


May 1915. Frenchman Julian Olivier will do anything to get out of the trenches. When British Intelligence recruits him to spy behind enemy lines, he jumps at the opportunity. Just before he begins, however, he has a chance encounter with a young French woman who leaves his heart marked for the remainder of the war—and he doesn’t even know her name.
Warren Flynn is a Canadian airborne hero, and dogfights with the Germans are all in a day’s work. Second only to his love of flying is his fascination with Claire Donovan, the daughter of an American munitions manufacturer living in Paris. Warren flies Julian into Germany and soon receives orders to post the Allies’ newest operative—an attractive French peasant woman named Evette—in Claire’s home.
As a dangerous ring of spies and saboteurs threatens to turn the war against the Allies, Julian discovers goodness in his enemies’ hearts. But even if he survives, will he ever be reunited with the woman whose memory he can’t erase? Will Warren survive the war, and will Evette unearth the infiltrator in her own territory before it’s too late? 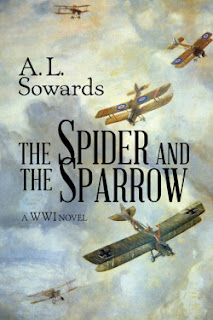 I loved this novel! It provides a stark look at World War I with emphasis on the enlisted men. Men on both sides comment they don't hate the enemy in the opposite trenches; they're both fighting a war they don't want to be a part of. The officers don't care how many are killed as long as they can stand in a progress report.
I liked how the characters were willing to pray. A common response is, I never prayed before; I can't now. Here they prayed because they had nothing to lose.
Author A.L. Sowards joins us now for a visit.

Did you watch any WWI films, like Kirk Douglas in Paths of Glory, to get a feel for the war?
I can’t think of any WWI movies I watched while writing the book, but I convinced my husband to watch two documentary series with me. One was called WWI: The War to End all Wars. Honestly, it was a little dry overall, but it had interviews with veterans and film footage of the time period, and that was cool. The other series wasn’t technically a documentary, it was a series of 36 half-hour lectures by Professor Vejas Gabriel Liulevicius available through The Great Courses Company. Most of my research was from nonfiction history books and memoirs. I ended up reading 27 of them and skimming a few others!

You state on your website, “I’ll let the characters in my books have all the adventures.” What’s an adventure that you’ve had? Did you ever try out for the Olympic swim team?
One year I made the time qualifications to go to Olympic Trials, but that was in 2001, so I was a year late! (I wouldn’t have made the Olympic team anyway, because I wasn’t that fast, but it would have been cool to say I went.) I swam competitively in college for BYU, and one year we went to Jordan, and that was amazing. We got to see Petra, Mount Nebo, Amman, Jerash, and the Dead Sea. We even had a small international swim meet. If I remember right, I won the 400 individual medley. And I still love hummus, pita bread, and tabbouleh.

You’ve written several WWII books. What do you see as the biggest difference in mindset between WWI and WWII?
I think a lot of the nations going into WWI didn’t know what to expect. They had no idea how long, how costly, and how horrific total war would be. When WWII started, people were more aware of how devastating another war might be. I think this was especially true of the French. At the start of WWI, the French military was eager to avenge their loss in the Franco-Prussian war, and believed good morale would triumph. But it didn’t, and the war nearly broke the French nation. Going into WWII, I think there was an underlying feeling that even though they won WWI, that victory had been more costly than their defeat in 1870-1, and that (and a lot of other factors) may have influenced what happened with France in 1940. There’s this quote by French resistance writer Jean Dutourd: “War is less costly than servitude. In the end, the choice is always between Verdun and Dachau.” Of course, in 1940, the French didn’t know about Dachau, and I wonder if they saw the choice as being between Sedan and Verdun, and who would want to repeat Verdun?

Verdun makes it easy to understand why so many favored appeasement. No one would want to go through that again. Thank you for joining us.

Email ThisBlogThis!Share to TwitterShare to FacebookShare to Pinterest
Labels: A L Sowards, The Spider and the Sparrow