Who's a Space Flight Fan?

I’ve been enthralled with space since learning about the planets in second grade. I subscribed to Space Shuttle magazine while it lasted, and collected space patches. So I was eager to read the new book Into the Black: The Extraordinary Untold Story of the First Flight of the Space Shuttle Columbia and the Men Who Flew Her by Rowland White. 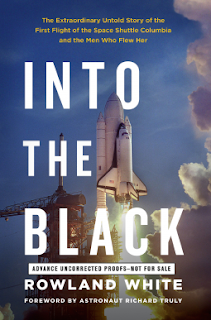 Based on interviews, NASA oral histories, and recently declassified material, Into the Black charts the saga of the Columbia’s first mission and the people who dedicated themselves to help the United States succeed in the age of space exploration.

The Air Force began planning its own Manned Orbiting Laboratory in 1963. Many military test pilots opted for the MOL, believing they’d have a better chance to fly with the Air Force than NASA. When the MOL program was cancelled in 1969, the MOL astronauts were restricted in where and what they could do next because of the classified intel they’d learned. Serving in Vietnam was out of the question, should they be shot down.
Someone suggested calling NASA, but they didn’t need more astronauts. They already had a lot. And if they did join NASA, no flights would be available for a decade, at least.
NASA required Air Force support to get the shuttle. The Air Force was happy using reliable, relatively affordable, expendable Titan rockets launched at Vandenberg Air Force Base in California. They didn’t need a shuttle to carry their payloads into orbit. Both the Air Force and the CIA offered no more than reluctant commitment to the shuttle. Their satellites weren’t compatible with the shuttle.
Since 1959, an Air Force test group in Hawaii had been retrieving film recovery capsules ejected from orbiting US reconnaissance satellites as they descended by parachute to the Pacific. As the film descending, an AF plane snagged it in a net.
Nixon okayed the space shuttle, saying, “Spaceflight is here to stay… and we’d best be part of it.” In the words of Oliver Wendell Holmes, “We must sail sometimes with the wind and sometimes against it, but we must sail, and not drift, nor lie at anchor.” It was Nixon who named the new space transportation system “Space shuttle.”

When Skylab was damaged during launch in 1973, NASA had no idea whether astronauts could repair it, or what tools they might need. An Air Force spy satellite took photos of the space station. Men in dark suits arrived at NASA, and showed the engineers photos showing the damage. On taking the pictures away with them, they told the engineers, “You never saw these photos and we we’ve never been here.”
It had taken days to the photos to be recovered, developed, and taken to NASA. Real-time intervention might have been possible if the Air Force had been allowed to have its Manned Orbiting Laboratory. 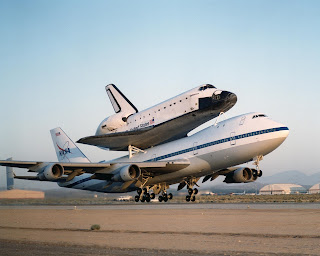 NASA engineer John Kiker got the idea for the shuttle carrier aircraft using a 747 or an Air Force C-5 Galaxy plane. His boss’s reaction? “That’s the dumbest idea I’ve ever heard.” In the mid-1970s, the oil crisis forced a downturn in commercial aviation. NASA bought a nearly new 747 from American Airlines for the bargain price of 16 million.
The shuttle’s journey from design to working spacecraft was long and potholed. The engines and the heat shield tiles bedeviled engineers for years. Impatient to move the shuttle along, NASA was inclined to skip redundant testing. NASA’s impatience would crop up again in management’s careless launch of Challenger in freezing temperatures in 1985. Eighteen years later, NASA’s unwillingness to ask for a spy satellite photo to inspect Columbia for damage condemned the shuttle and its crew of seven. 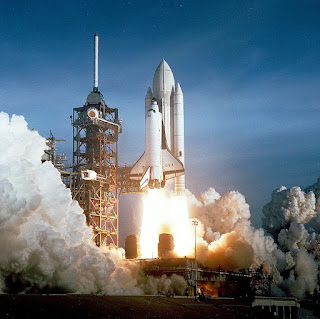 Columbia’s first flight in 1981 saw hot plasma gas seep into the starboard main landing gear door through gaps in the tiles during reentry. The aluminum skin of the door structure softened and buckled, but did not affect the orbiter’s landing.
Did you want to ride in the space shuttles?
Posted by Terri at 12:00 AM

Email ThisBlogThis!Share to TwitterShare to FacebookShare to Pinterest
Labels: Into the Black